Skip to content
[Theodore Roscoe was a popular and prolific writer for the pulps, in addition to being a historian. He was famous for his French Foreign Legion tales and dabbled in other genres as well. Most of his tales were set in remote places which he travelled to. He was a very popular writer for Argosy, where many of his tales were published. More after the break.] 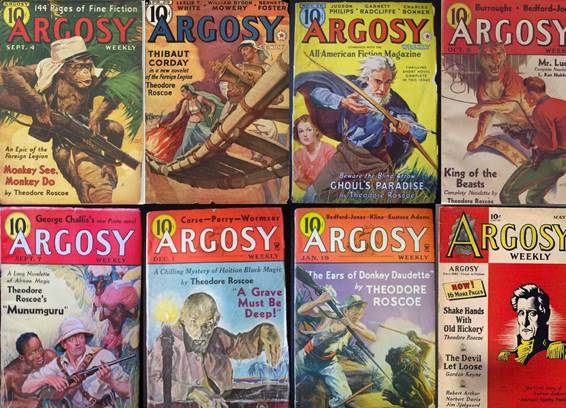 Theodore Roscoe was born on 20 February 1906 in Rochester, New York, to Harvey and Alice Roscoe. His parents were missionaries. His mother was born in 1865 in India, the daughter of an American missionary, and grew up there. She went to Beaver College in America and went back to India subsequently, where she worked in the Bareilly region, being in charge of the mission schools there.

She met Harvey Roscoe there; he was a missionary as well. They married in 1895; and came back from India to bring up their family in America. Theodore was the youngest of four children, with two brothers and a sister. He went to East High School in Rochester, NY, where his parents had settled. Even as a young boy, he used to write stories and sell them to his family for a cent.
He completed school in 1925. He was on the school band and the assistant editor of the school magazine, The Clarion.  He played chess as well. I was able to locate a picture of him in the school yearbook for that year.

His school yearbook says that he had decided to go to Columbia University. He took odd jobs and kept writing stories, trying to break into the pulp market. He took a course in short story writing in Columbia University, but did not recommend it. One of his jobs was as a mail-carrier; it was an inspiration for one of his first stories. Once he had sold his first stories, Gloom of Night to Action Stories and The Duelto Northwest Stories, he quit college. His parents had travelled around the world, and he was bitten by the travel bug as well.

Within a year, he was selling many stories and he began travelling. He would travel, come back to Rochester, write short stories and get back to travel whenever he wanted a break. He set his stories in the places he visited, and took his characters from the people he met on his trips.
I have only managed to find out about a few of his trips that were reported in the Rochester newspaper of the time. In 1929, he visited France and Algiers.
“Be there a man with soul so dead that it didn’t tingle a trifle when his ears heard mention of the Foreign Legion of France! La Legion Etrangere! The Hell Battalion! The Army of the Damned! The Stepsons of Madam Republic! The sun-bitten, war-smitten corps that has carried the Tricolor from Casablanca to Hanoi, Dahomey to Somaliland, the English Channel to Madagascar. The outfit known to French regulars as “cavalry on foot’’ because it can march so fast and far. The Legion!
Early in 1928 an editor asked me to concoct a series of Legion yarns for his fiction magazine. After considerable research I enjoyed doing these, and published a few more in other magazines. Stories of the Legion were getting across to a romantic reading public, and more were wanted. A little authenticity would not be a bad idea. One magazine could use a longer series, and I could use more authenticity So in early January of ‘29 I set out for Morocco and Algeria with an empty notebook, a camera, an Arab dictionary, and a grammar school romance idea of Africa,
The Summer before I had met (and used) an ex-Legionnaire on the P. L. M. flyer running from Paris to Marseille. He was the train conductor and six years out of the service. He told Legion yarns in a French accent difficult for a casual knowledge of the tongue, and I learned he was an Albanian, or something, automatically become a French citizen after five years’ service in the Legion. He had the actual goods, all light: gossiped all the way from Dijon to Avignon, and insisted on having me poke a finger into a deep shrapnel scar sunk in his shoulder.
But he was too much of a vicarious soldier, and the local color was missing. So I landed in Casablanca. Morocco, intent on finding an army of escaped criminals and expecting to see sand dunes and Arab sheiks and all the rest of the glamor.”

Hollywood wasn’t so accurate, though. He found the Arab sheiks weren’t Valentinos (“The Arab sheik is no trim, brunette gentleman with patent leather hair, a charming taste in ladies and eyes haunted by the starlight of the Sahara.”) and the women wore the veil to conceal their features (“They are grandmothers at 30. Even at 16 they could not have been magazine covers”). Only the Legion and their opponents lived up to their reputation.

In 1930, he made a  trip to London with no return ticket and only fifty dollars in his pocket, and returned with more money than he started with, having sold the British rights to his stories.
In 1931, he visited Cuba and Dutch Guiana. Cuba was having a revolution at the time.
“Former President Menocal planned recently to overthrow President Machado. His plans were nipped in the bud when the administration learned that he had ordered 4000 ham, cheese and chicken sandwiches from the Havana Club to supply his soldiers with rations. So they threw Menocal in jail, and ate the sandwiches themselves.”
In 1932, he visited Burma and Somaliland.
“Recently I visited the Somaliland, a place where the wind is extremely high and has great velocity. While there a native told this story, which he claims to be true. The native said that one day while seated in front of a last, part of a colony of a hunting expedition, he noticed the flag which flew at the head of the tent was blown out straight and stiff – so much that a crow came and perched on the flag.”
In 1934, he made a trip to South America on a freighter and visited Colombia. The freighter was carrying 200 tons of bombs for the Colombian army. In 1936, he made a trip to Mexico by car.
He wrote daily, carrying a portable typewriter with him in his travels. He was modest about his writing.
“It’s just a trade. You learn the formula and then sit down in front of a typewriter. Sometimes I do two, sometimes three. I have done four stories in a month.
I’m not artistic. Don’t get me wrong. I’m just a workman. What I’m doing isn’t art. I don’t even try to disguise it as such, but it sells – and that’s the important thing. My stuff will probably live just as long as that of some of the highbrows, too. Which is until two days after it is published.
The trouble with most people, when they think they want to write, is that they think they want to be Dickens. That’s all very well – but a Charles Dickens is born only every so often. The rest of us would do better if we went after Bertha M. Clay’s honors, and gradually worked up. You can’t exactly start at the top in any business; and that goes for the business of fiction writing in a double dose.”
He had hundreds of stories published in the pulps. Argosy was his main market, but he did publish three stories in Adventure as well. During World War II, his asthma prevented him from getting into the military, but he ended up getting a civilian Distinguished Service Medal for his work as a naval historian. On 01 Sep 1943, he married Rosamond Gillmore.
With the pulp market dying, he continued working as a historian. In the forties, he was also turning out articles on unsolved crimes for The American Weekly. He wrote a book, Web of Conspiracy, on Abraham Lincoln’s assassination. The book was a best-seller and was made into a TV series. The Roscoes moved to Florida in the early 1980s.
Theodore Roscoe passed away on 29 May, 1992.

Links to books in print:

Altus Press are reprinting his Thibaud Corday stories from Argosy. All of those I read have the same structure – Thibaud sits in a café, telling an implausibly tall tale, or so it seems – and then he lifts the curtain, showing what really happened. And there is a plausible explanation for what happened. The stories I read were about Alladin’s lamp (The Wonderful Lamp of Thibaut Corday),  a talking statue (The Wonderful Lips of Thibong Linh) and the magical seven league boots that could cover seven leagues in a single step (Corday and the Seven League Boots). I’m looking forward to getting all four books in the series.