From the letters column of the Author’s League Bulletin, Vol. 6, No. 7, October 1918, a letter from H. Bedford-Jones about some typewriter modifications he made to increase his speed. Bedford-Jones was the “King of the Pulps”, writing more than a million words a year.

A standard L.C Smith typewriter from the era: 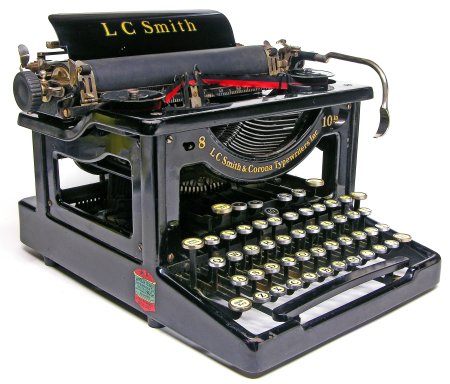 Sir: In a recent issue I note an interesting stickful anent the proper typewriter keyboard for an author’s use. I have given this matter some attention, have had several machines constructed for me, and my experience might be of some use to others.

I use an L. C. Smith, with the standard single-shift keyboard. The top row holds the figures, which, of course, are constantly used—but very seldom in conjunction with text. Therefore, I put the figures up, on the shift; this gives me access to ten punctuation marks struck without shifting, as follows:
“ ” ‚ ‘ ? ! ; : — —

The right-hand key of the second row from top is an odd key; on this I have the ¶ up and the ñ down. The two right-hand keys of the third row from top arc also odd; on these I have the * and ‘ up, and the ^ and ‘ down. The two accents are on the one key, a “dead” key. On the bottom row I have commas on a single key, periods on another, and on the final key the $ up and the = down.

I might add that the & takes the place of the cipher in the top row. Of course, I don’t know that this is an ideal arrangement; many writers would prefer not to bother with double quotation types, for instance. By an accident, due to the obstinate and almost undealable-with agent from whom I got my last Smith, the figures and punctuation marks are all in pica type, and the letters in elite. I find it not half bad, for the figures and marks are thus emphasized very slightly.

All this may be regarded as hypercritical and unnecessary stuff, but it makes for ease and comfort when one turns out 100,000 or more words per month. Another thing: The Smith people, and I presume other companies also, can provide keys bearing two letters, such as the word “of,” which is very frequently used. The companies will do this, but the local agents are hard to deal with and very ungracious. It is best always to deal with a general agent and have the machine shipped from the factory, avoiding local agents altogether.