[Inspired by a post on the True Pulp Fiction blog, I read this issue and posted a review. The 1/- sticker on my copy indicates that this issue went from the US to the UK at one time, and it found it’s way back and finally reached me.] 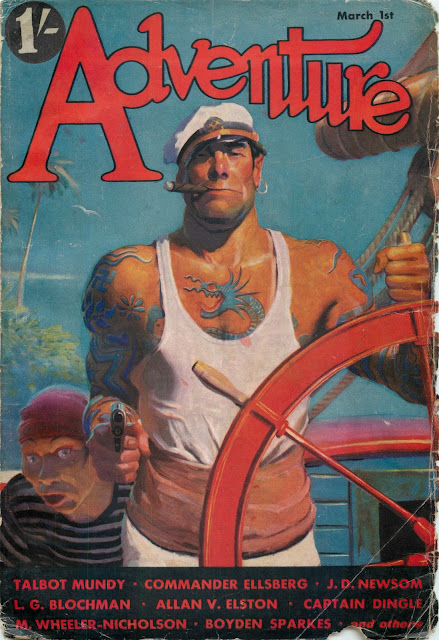 It was close on eleven o’clock on a raw November night when Henri le Requin (the Shark) and Jules Etudiant (the Scholar) sauntered into the hall. They were typical young men of Menilmontant: twenty, pasty faced, sharp featured, with a wary look in their eyes half hidden by the brims of greasy cloth caps. They wore workmen’s coats of blue denim, pegtop corduroy trousers and canvas sandals with rope soles. They walked with a light, springy tread, as though at any second they anticipated trouble.

Just inside the doorway they paused and leaned against the wall.
The French Apaches were hardened criminals who thought nothing of committing robbery and murdering an elderly widow, killing a cabman and assaulting two police officers in broad daylight, or attacking firemen who dared try to extinguish the arson fires they lit.
Newsom’s story starts with two of these hard cases returning from prison to a bar where they hope to find the police informant whose evidence convicted them. They end up killing him and two policemen, and join the French Foreign Legion to avoid Msieu Deibler, the executioner. Newsom is no fan of imperialism, and although he admires the spirit of the Legion, he deplores what it is spent upon – keeping up a tottering French colony with no support from France.
There is a passage in this story to that effect:
THE great powers have never waged a colonial war, nor subjugated their backward brethren, nor annexed barbarous countries for the mere sake of loot. No, most certainly not! Perish the horrible thought!
Whenever they have been compelled to assume the white man’s burden, they have done so in the name of peace, of progress, of humanity, of civilization. Their corporate souls are lily white. Their aim is to uplift and educate. They are altruists, every one of them. They have done great things. They have wrought miracles. The industrial age has been wished upon ignorant, slothful peoples who were stupid enough to have few wants and who were content to live in ignorance of the beauties of compound engines, dynamos and sanitary plumbing.
These lazy savages have been made to appreciate the glory of toil in roaring factories and in mines where safety devices are considered effete. They have been taught the pure joy of conscripted gang labor, of starvation wages, of the overseer’s whip. And if they refuse to be modernized, if they declare that they want to be their own masters in their own homes, if they prefer to stagnate instead of joining in the forward march of progress, then they are called fanatics, and shot.
The two Apaches, once in the Legion, follow different paths. One sinks lower and lower, and the other, inspired by the military regimen, becomes a soldier, a leader of men. He goes on to become a lieutenant, an almost impossible feat for an enlisted man. But the authorities, not knowing his past, are not sure what he’d do under pressure. So they send him to an outpost in Morocco, on the borders of the great Sahara desert. The desert heat, the constant fear of rebel attacks and the dispirited company of men there drive the lieutenant to despair and drink, undermining his training, till he reverts to his earlier character, killing the son of a visiting Moroccan chief in a drunken rage.
The tribe attacks, and sends a message that their honor demands the blood of the man who dishonored the laws of hospitality by killing a guest. They will not hesitate to avenge this, though they may have to climb over a mountain of their dead to do it. The lieutenant plans to resist, but the tribe has control of the oasis that is the soldiers’ water supply. Surrender or die of thirst, that is their choice, and the lieutenant has to choose…
Walker Martin feels that the Blochman tale is the highlight of this issue, I believe the Newsom tale is the real star. A forgotten gem and proof that Adventure was still worth reading in the 1930s after Hoffman left.
Mister Emu · Wyman Sidney Smith · ar
Today’s Raw Bronc [Part 1 of 8] · Gil Strick & Alan LeMay · ar
A fact article about the cowboy’s horse – the bronco. It’s likely Gil Strick was a cowboy that told the facts to LeMay, who used his training as a journalist to work it up into this article.