WHEN Jake Humphries stuck a Winchester around a comer of the barn and took a pot shot at Bill Collier he started some-Jake thought that Bill had a warrant for him, which was all wrong, for Bill had that day resigned as deputy sheriff. He had excellent reasons for his resignation. As he had put it to the sheriff—

JUST outside of Plymouth, in the English county of Devonshire, John Avery kept a tavern, under the patronage for the most part of coastwise and deep-sea sailormen. It was a comfortable place, was that inn of good Master Avery, with its sanded floor, diamond-paned windows, clean tankards and the good ale and victuals that made the house synonymous with home for the parched mariner off in Malabar or his brother expectantly bumping homeward-bound around the bulk of Africa’s majestic cape.

A good place with a good landlord, but, alas for perfect pleasure, with a landlady not so good. For while mine host endeavored to drink as much as his customer, leaving the score an amicable affair between gentlemen, mine hostess tallied every drink and- clawed every broad penny laid upon the table. And how incompatible boozing and bookkeeping are, every one may be presumed to know.

Arthur M. Harris was a Seattle based lawyer who came across the courtroom records of old piracy trials. He found them so interesting, he wrote a series of articles about them. This one deals with the trial of William May, a pirate in the company of Henry Every. He makes a story from the trial transcript, and passes his own judgement at the end. I might have appreciated it more if Internet access hadn’t been around – we now have to deal, more than ever, with the problem of too much to read and too little time to do it in.

The author published a series of these stories in Adventure, eventually making a book out of them with the title Pirate tales from the law.

NOW IT came about that Mohamed Ali, the bandit, after having tricked the Basha of Tangier and brought quick death to Kaid Bargash of Ain Dalia through another maneuver, was yet hunted day and night by soldiers of the sultan. But Morocco, which was designed by Allah for the pleasure and safety of the Faithful—although Europe has now made it slightly obsolete in that respect—offers innumerable retreats for a fugitive.

Although Mohamed Ali was now officially an outlaw he was nevertheless not a low character or one without recognized power. Being a direct descendent of the Prophet, Mohamed Ali was a shareef, which is a prince of Islam; and although the sultan, who of course was the greatest shareef of them all, might cut off his head and hang it grinning over the Fez gate, the passer-by would look upon it with reverence—and until then would earnestly seek his blessing.

Mohamed Ali, the Moroccan rebel, finds himself surrounded by the Sultan’s army. He makes an ass of their commander and saves himself.

This story and others of Mohamed Ali are collected and available from Black Dog Books in their Adventure library (disable your adblocker to see the book link):

I WAS through the door with the kettles and running toward the creek before she could offer more objections. I reached the water and dipped the kettles full before the savages opened fire. A red man does not know how to take care of a gun. Most of their arms were the faulty trade-muskets, and their aim was poor even under decent conditions. I started back, confident the heavy balls would miss me; but when they began showering down their arrows I was more concerned.

LOUIE BIRD-THAT-FLIES-IN-THE-EVENING had the frame of a Roman gladiator and the disposition of a hyena. There was just enough Indian blood in him to entitle him to endorse his Uncle Sam’s oil-lease vouchers, and to warp and twist his soul into the mold of a being halfmonster, half-human. The result produced by the mixture of alien bloods in the same vessel is something no chemist has been quite able to account for, but perhaps Louie’s career may be better understood when you consider that his lineage was composed on his mother’s side of the diverse strains of Micmac, Canuck and Chickasaw and that his father was a white man with an extensive and fascinating jail record.

LOUIE BIRD-THAT-FLIES-IN-THE-EVENING had the frame of a Roman gladiator and the disposition of a hyena. There was just enough Indian blood in him to entitle him to endorse his Uncle Sam’s oil-lease vouchers, and to warp and twist his soul into the mold of a being halfmonster, half-human. The result produced by the mixture of alien bloods in the same vessel is something no chemist has been quite able to account for, but perhaps Louie’s career may be better understood when you consider that his lineage was composed on his mother’s side of the diverse strains of Micmac, Canuck and Chickasaw and that his father was a white man with an extensive and fascinating jail record.

Mixed race Native American attempts to outwit a white man with predictable results. A rather poor tale.
Judgment by Steel · Arthur Gilchrist Brodeur · ss 4/5
??CERCAMON’S swift, sensitive instinct drew his eyes, in the midst of his singing, from the Count of Barcelona to the white-faced woman on the count’s right hand. The notes faltered on his lips at sight of her ashy, frightened face; the next instant her scream cut short his song.
Then none had any list for song. Some leaped to their feet, startled and pale; others sat staring. But Count Raymond-Berenger the Great rose slowly; his dark eyes rested, with terrible intentness, on the central figures in the sudden tragedy. And as he rose, all, men and women alike, turned toward him—all, save Cercamon the Troubadour, who could not take his eyes from the horror-stricken features of the Lady Maria de Moncada.
Beside her, hunched in his chair, sat Gomez of Moncal; and it was plain to all that Gomez was dead. His hand still clutched his thin-stemmed wine-glass, from which the blood-red wine had spilled upon the tablecover; his face was distorted in a horrible grimace of pain. His friend and lord, Perez de l’Arba, had reached across the dead man to seize Lady Maria’s arm, which he still held in a cruel grip; and he was livid with anger.
“What is this?” the voice of Count Raymond, quiet and sinister, broke the silence.
It was then that Perez de l’Arba sprang up, his fury almost choking speech, and…
Ambassadors from the Kingdom of Navarre are visiting the court at Barcelona. At a feast, one of the ambassadors is poisoned. Suspicion falls on the wife of the Catalan general Andreu de Moncada, the defender of Barcelona. A vial of poison is found in the folds of her dress.
She is to be put to death when her husband, defending her, demands a trial of combat against her accuser, Viscount de’l Arba, the chief of the Navarre delegation. Moncada is outmatched in physique and swordsmanship by the Viscount. It is clear that if the match happens, the Catalans will be without their greatest general, and will become vulnerable to conquest. The visiting troubadour, Cercamon, is drawn into this trouble.
Brodeur’s stories of Cercamon and Faidit are very similar to Harold Lamb’s stories of Khlit the Cossack. Like Khlit, the two depend on their brains before putting their hands to their swords. They are no cowards, though, and fight when it is necessary. An excellent story from one of the best authors in Adventure.
This story and others are collected and available from Altus Press (you’ll have to disable your ad blocker to see the link to the book):
Ask Adventure · Anon. · qa 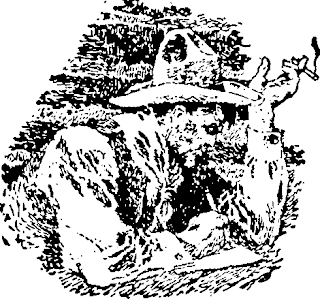