Skip to content
[Had my curiosity aroused by a few recent posts on Facebook about some rare Hersey pulps, so decided to do an article on him. All pictures are from the FictionMags Index. The only Hersey pulp i have is a coverless copy of Spy Stories, v1 n1 that i picked up at a recent convention.]
Harold Hersey is described in the Science Fiction Encyclopedia thus:
(1893-1956) US editor, publisher, short-story author and poet. A man of great energy and relatively little talent (italics are mine – Sai), Hersey edited such sf Pulp magazines as Thrill Book, Miracle Science and Fantasy Stories and Mystery Adventures, though most of his editorial work was not sf-related.
A brutal but probably accurate assessment of his impact on the pulp world. For a more detailed biography, see David Saunder’s article on Hersey at his always excellent Field Guide to Wild American Pulp Artists website. 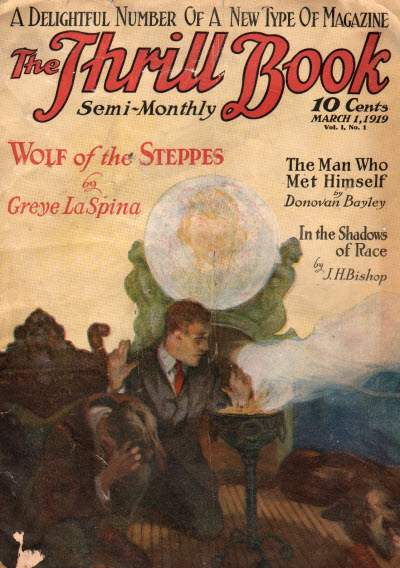 This was the first pulp that Hersey edited, published by Street and Smith. This was a milestone in the field, the first attempt at a magazine of weird and fantasy fiction, considered by many to be the predecessor to Weird Tales magazine – the home of H.P. Lovecraft, Robert E. Howard and Clark Ashton Smith among many other luminaries. Like many Hersey edited magazines to come, this was unsuccessful.
Hersey then went to work for William Clayton, the publisher of the Clayton magazines – Ace-High, Cowboy Stories, Clues and many others. It was probably at Clayton that Hersey got the inspiration for the design of the magazines that the was to launch later – a distinctive layout with a band running on the left side, white backgrounds with vignettes, and cover art from the best artists. Cover art sold pulps, a fact that many failed experiments over time proved – Adventure in the late 1920s, Argosy in the early 1940s and others that I’m sure readers of this blog know. At Clayton, Hersey was responsible for launching Ranch Romances, the longest lived of the pulps.
Hersey left Clayton Publications in 1927, and went to work for Bernarr MacFadden, where he might have had a hand in Ghost Stories, a strange magazine featuring purportedly true stories of ghosts. 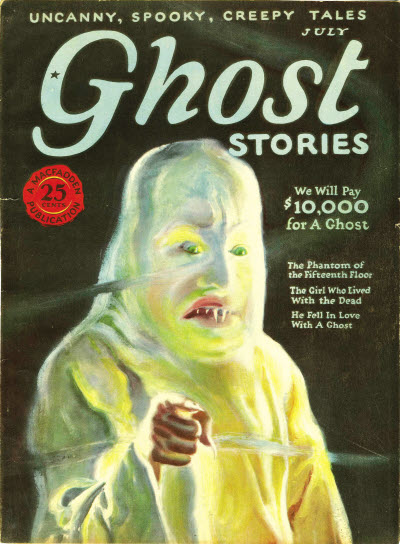 It was after this stint that Hersey would become a publisher for the first time, with Magazine Publishers Inc. where he was a Vice-President. This was where he would publish the pulps that are now mostly sought after more for their cover art and rarity than their written content, including the extremely rare Fire Fighters of which I believe known copies are in the low single digits.
Next was the line of magazine published by the Good Story Magazine Company. I believe this line of magazines was funded by Bernarr MacFadden, who may have not wanted to associate his name with them. And considering some of the gangster titles, I’m not surprised. There were many organizations and politicians in New York state that tried to have these magazines banned as they were thought to be glorifying crime and making it attractive to younger, impressionable minds.
By 1931, MacFadden publications were hit by the Great Depression and he stopped funding the pulps. Headquarters Publishing was Hersey’s second attempt to become a publisher by himself.
The last gasp of Hersey’s publishing empire was his attempt to get in on comics publishing in 1936/37.
Other oddities
And if you’re feeling a little overwhelmed by all this weirdness, you might want to get some Harold Hersey wine 😊. (Seek and ye shall find, the good sage Google says). And for those brave souls who are more interested in Hersey’s career than wine, here’s a few books that have more information on him.