Skip to content
The is the last in the series of 3 reviews of Dime Detective from the 1930s, 40s and 50s. Dime Detective, along with the rest of the pulps, was struggling financially in the 50s. You can see this from the absence of big names from the issue and the inclusion of a reprint from 1941. There were 16 pages of ads (including the covers), so you were only getting 90 pages of new fiction for your quarter. Even accounting for the difference in paper sizes, you got more for your money from a contemporary paperback.
Having said that, it’s still a good issue. Interior illustrations are uncredited and unsigned, no idea who did them. 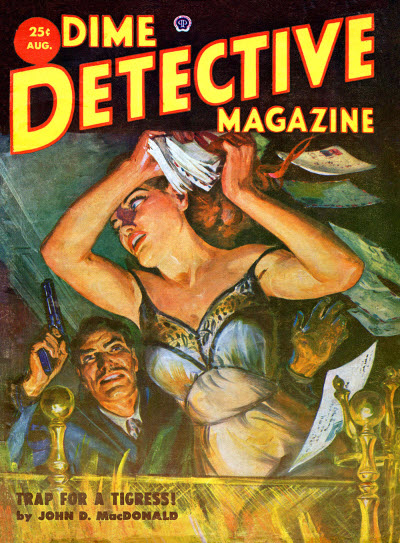 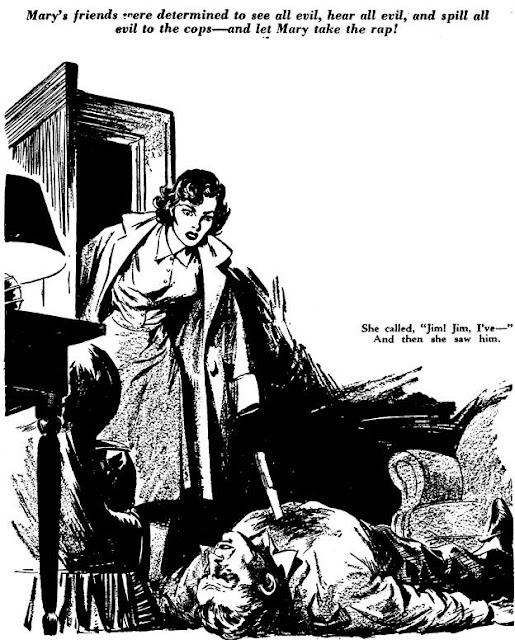 Mary and Jim have been having a lot of arguments lately. All the neighbors have got used to the daily fights, and tonight Mary heads out for a walk after her fight, and comes back home to find Jim’s body on the floor. She pulls out the knife that stabbed him, and gets her clothes wet with blood. She then decides to call the police but realizes that all the evidence is against her, so she cleans herself up, hides the bloody clothes and then calls the police. The cops find the clothes, and her fingerprints on the knife, and are ready to close the case when one of the police detectives gets a hunch that she is innocent.
An average story, nothing stands out.
Sing a Song of Murder· Larry Holden · ss 3/5
Marty and Belle have come to Mexico to get evidence from the doctor of Erden, the criminal who Marty thinks killed his father. Erden’s alibi was provided by the doctor, who proved that Erden’s knee was so bruised that he couldn’t stand.
Marty is consumed by the idea of revenge. They’re both strained and tense of waiting for the doctor to confess his part in the murder, and this has severely strained their relationship. Belle, who has been trying to get the doctor to brag about his part, cracks under the strain pushes the doctor off a boardwalk on to rocks nearby, and he sprains his ankle. They’re both unnerved by this and decide to call off the plan to get revenge, and decide to head back home the next day. The next day, though, Marty discovers Belle wounded, and confronts the doctor, who claims he couldn’t have done it because his ankle is badly sprained.
What happens next is interesting, but not surprising to anyone who’s ever had a dental procedure. The first half of the story is well-written.
The Key · Harry Widmer · ss 4/5
Eunice Caron is visiting Harvey Bedford, the local lothario, for a quick afternoon tryst before heading off to the country club for a round of golf with her friends and their husbands. As she is going in, she sees a handsome stranger leaving the place. She is alarmed but goes in anyway, to discover Harvey is putting a pistol to his head. She tries to grab it from him, and in the ensuing struggle the gun goes off, burning her hand and ending Harvey’s life.
She drives back to her house, where two friends are waiting for her, and proceeds to get dressed. To divert attention from her burnt hand, which will make her unable to play golf, she puts on a skimpy dress and golf gloves, and heads out. The club’s rules forbid women from playing in such clothing, and her husband their freinds go ahead with the golf round without her. She faints, and comes to in a doctor’s waiting room, where…
This is a cracker of a story by Harry Widmer, possibly the same Harry Widmer who was the chief editor of A.A. Wyn’s Magazine Publishers, and edited Ten Detective Aces. Short and with a wicked bite at the end, it’s the perfect antidote to the predictable stories I read earlier in this issue.
My Night to Kill· Dane Gregory · ss reprinted from Detective Tales Aug 1941 3.5/5
Harrigan, a honest policeman, and his wife Laura are going through a tough period in their marriage. Laura feels that Harrigan’s humanity is being diminished by his job, and Harrigan feels that he’s losing her. Tonight Harrigan is going out to raid the Fallon mob, and he expects to find Laura’s brother, Lonnie, among them. Lonnie has managed to conceal his heroin addiction and the consequent degradation of his character from Laura, but Harrigan knows the truth.
He writes a letter to her, explaining the situation, and asking her to choose between informing her brother of the raid and letting the raid go through, no matter what the consequences are. Then he leaves their house.
Harrigan is waiting for the mob to break into a jeweller’s warehouse. But things go wrong, and the mob hits another location. Harrigan believes that Laura has informed her brother of the raid, and knowing her choice, realizes that some other policemen are going to die because of his choice. He volunteers to go in alone after Lonnie, and the other policemen let him do it, realizing that it might be his only moral choice.
Well written hardboiled story by Ormond Robbins, who specialized in weird menace and detective fiction.
And now a couple of features:
Felony Follies · Jakobsson & Waggener · cl
Waggener is likely Oren Waggener, with Jakobsson contributing the text and Waggener the illustrations.
The Thrill Docket gives an peep into a story in the next issue (Beautiful, Blue and Deadly! by Burt Sims in Dime Detective Magazine, October 1952).