[I sent Walker a mail after the recent Heritage Auctions. For those who didn’t follow it, the first issue of the Shadow went for $156,000. From  there the conversation went, as it usually does when we chat, to Adventure and what issues were the hardest to find when he was collecting. He sent me a long reply that really made sense as a blog. Enjoy!]

Your question about what years of Adventuredid I have the most trouble collecting made me think all the way back to 1972, almost 50 years ago.  When I attended the first Pulpcon in 1972, my main collecting interest was Black Mask and Weird Tales, both of which I was just about finishing up complete sets. I had started collecting them back in 1968 after being discharged from the army.  My main goal back then was not to find a job and start a career, not to get married and raise a family, not to buy a car.  Not any normal goal most men in their twenties would have after the two year disruption in their lives caused by the draft.

No, my main goal was to compile complete sets of Black Mask and Weird Tales along with other detective magazines like Dime Detective and Detective Fiction Weekly.  Also I was on my way to completing sets of all the weird menace pulps like Horror Stories, Terror Tales, Dime Mystery, Thrilling Mystery, and all the Red Circle titles. True, somehow, along the way, I picked up a wife, a family, a job, and a car.  I also got a house but I saw it as a place to store my pulps and hang my original pulp cover paintings.

I had been collecting SF magazines since 1956 when I discovered and bought my first magazine off the newsstand.  It was as if blinders had been lifted off my eyes and at the age of 13 I saw what I thought was the most beautiful thing, the February 1956 issue of Galaxy SF. I quickly started collecting the other SF titles and eventually ended up with almost all the back issues of the old magazines. 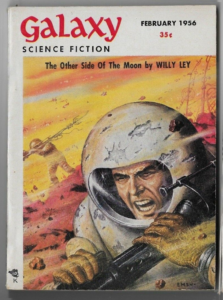 Fast forward 10 years to 1966 and I’m in the army, away from my collection of SF.  But then a life changing event happened.  Sometimes you hear about books changing your life.  Well it’s true. I bought the paperback collection edited by Ron Goulart called THE HARDBOILED DICKS at the army post exchange.  I had stupidly thought that the other adult pulps like the detective titles had not survived. I figured the SF pulps survived because teenage boys and young men had saved them but that grown men had read and thrown away the other genre titles. Goulart’s book proved me wrong.  I wrote Ron and he sold me all his copies of the detective pulps for $2 or $3 each.  I was off and running on a lifetime pulp quest of reading and collecting these great old magazines. 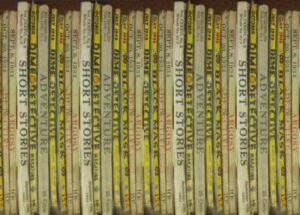 By the time the first Pulpcon was held in 1972, I really knew nothing about Adventure magazine but the convention had stacks of the magazine for sale for around a dollar each.  Nils Harden had all ten years of the forties, each year tied up with string.  He wanted $100 but was reserving them for a customer named Harry Noble.  I asked Harry if I could have the set and he said yes because he had been buying pulps for a quarter or 50 cents and didn’t want to pay a dollar each.

After the convention, I drove to Harry’s place in Morristown, NJ to buy more back issues of Adventure. He lived in a converted army barracks on the grounds of Greystone hospital.  For $30 a month the hospital let employees live in these shacks. Harry had a two bedroom tiny apartment full of books and pulps.  He also had 4 children and a wife.  Decades later, at his funeral, I asked one of his daughters how Harry managed to fit everyone in such a small space.  The two girls had one bedroom, the two boys had the other, and Harry and his wife slept on the sofa bed in the living room. I remember seeing the bed which was covered in pulp shreds.  Even the kitchen table was covered in pulp flakes.  When Harry put some chocolate chip cookies on the table you ended up eating cookie crumbs and pulp shreds, a healthy diet that no doubt contributed to his long life.

He had a complete set of Adventure, all 753 pulp issues, 1910-1953.  He also had a couple hundred duplicates which he agreed to sell me at $2 each.  Most were in the 1920’s and 1930’s.  I still remember Harry slapping down each issue on the table, raising clouds of crumbs and pulp chips, as he chanted $2, $4, $6, etc.  I was in heaven.  Right then Adventure became my favorite magazine and I could hardly drive home in my hurry to read them and find more back issues.

So to answer your question, what years did I have the most trouble collecting?  Hell, none of them.  Back then they did not seem rare at all.  I quickly completed my Adventureset in a couple years, even the harder to find issues in the teens.  In fact, several years later, Harry sold me a complete duplicate set of all the 753 issues and I kept the better condition copies and sold the others through the mail and at Pulpcon.

Though the teen issues(1910-1919) were harder to find, in the 1970’s they were still inexpensive.  I don’t remember paying more than $2 to $5 each. The only exception being the first issue which I managed to find for $10.  The first few issues in 1910-1911 were published with sturdy book paper which is still white more than a hundred years later.
In the 1970’s and even the 1980’s there were not a lot of people collecting Adventure. I had very little competition while collecting the magazine.  In fact most collectors were interested in the SF pulps and the hero pulps like Doc Savage, The Shadow, The Spider, etc. At first I also collected the hero pulps and soon had almost all of them.  There were some exceptions. I never bothered with Doc Savage because the issues were reprinted in paperback.  I stopped at 150 issues for The Shadow because I tried a dozen times to read the pulp but Walter Gibson’s style was just too turgid and long winded. I found all the hero pulps, except maybe The Spider and Secret Agent X, to be not as interesting as the adult pulps like Black Mask, Blue Book, Short Stories, etc.  I soon got rid of them and had to laugh when Harry Noble called them “unreadable crap”.  My feeling now is that they were aimed at the teenage boy market.

My favorite years are 1918-1927 when Arthur Sullivant Hoffman was editor.  I’ve read most of the stories and made notes of my comments, grade, and date read.  All the issues have  pieces of paper with my comments in them.  Now of course the early issues are the hardest to get but it is still possible to put together a complete set of Adventure.  It just takes longer and costs more money. For instance Ed Hulse, in a few years, has managed to find almost all the issues.  Just recently, a few years ago, I was reading a listing of pulp related books for sale from Mike Chomko.  At the very end of a long listing he casually mentioned that he was thinking of selling his Adventures, over 200 issues, all in the 1920’s.  I quickly wrote Mike and offered to buy all he had even though I had the issues already.  I was interested in buying them in order to upgrade my copies.  For the next few years I kept asking Mike about them and finally one year he brought the issues to Pulpfest for me to look at.  I spent a few hours looking at them and we completed the sale. I now had over 200 duplicates and Sai was first in line to buy all of them.

(Sai: I was going to buy those but Walker got in ahead of me. Never gives up collecting, and never sells anything, much to my regret.)

I’ve had a lot of fun reading and collecting Adventure these past 50 years and I miss talking about the magazine with Harry Noble.  I wish I could do it all over again.  I’m getting older now and it’s hard to imagine an afterlife without Adventuremagazine.  Harry told me if there was an afterlife for book and pulp collectors, he would find a way to let me know. He died at the age of 88 in 2006 but so far there has been nothing but silence.

(Sai: I hope the ghosts of the books we love stay with us in the afterlife.)