James Corbett fans, rejoice. A cornucopia of Corbett’s books are now listed on EBay and an autographed copy of The Merrivale Mystery sold yesterday for $261. They were the pride and joy of someone’s collection; and if you aren’t careful that someone could soon be you.

You haven’t heard of James Corbett? Really? I’m surprised. Compared to the great Cs of mystery fiction – Carr, Christie and Queen – by no less an authority than William F. Deeck, who admired Corbett’s luminous, limpid prose so much that he wrote an entire book of essays on Corbett, with copious quotes from the master, because otherwise no one would have believed him. The Complete Deeck on Corbett is one of the great non-fiction surveys of crime fiction, comparable to Bill Pronzini’s Gun in Cheek, Son of Gun in Cheek and Colin Watson’s Snobbery with violence. But whereas Pronzini searched far and wide among the output of many authors to find his classics, Deeck never looked further than Corbett. He didn’t have to; who else could have written these gems

“It was a single-chambered revolver.”

“Her tone was coldly if normative.”

It somewhat resembled the French villas found at Pans Plage, except that the design was entirely English, while in that respect it was unique.

These were taken from The Complete Deeck on Corbett; the authoritative (not to mention only) guide to the master’s work.

You have already seen one of the elements of Corbett’s success: perplexing prose calculated to arouse the curiosity of the reader, who can’t quite believe what they’re reading. The cherry on this pile of polished prose is Corbett’s gift for plot resolution. The villainous twin brother of the wrongly accused man is a cliche; Corbett avoids it by making his villain an evil and completely unknown triplet (The Monster of Dagenham Hall).  The Merrivale Murders, his first book, features a dwarf who skulks through secret passages in a stately home. Read Deeck’s book for more.

The Corbett cornucopia gives us a chance to glance at these masterpieces. Let us flip through a few.

While Deeck talks extensively of Corbett’s language and plot skills, he neglects to provide us with any details of the covers. This is understandable; any reader who reads Corbett extensively will naturally fail to remember details as the mind recoils in horror to protect itself. But since I have not been directly exposed to the books themselves, only their EBay listings, I can rectify that omission.

The first thing that commands attention is the direction on the covers: “For summary of this story, see back of wrapper”. With an arrow mark pointing to the back cover. Clearly they did not expect the reader to be intelligent enough to turn the book over without being directed to do it, giving us a vital clue to what kind of readers they were. 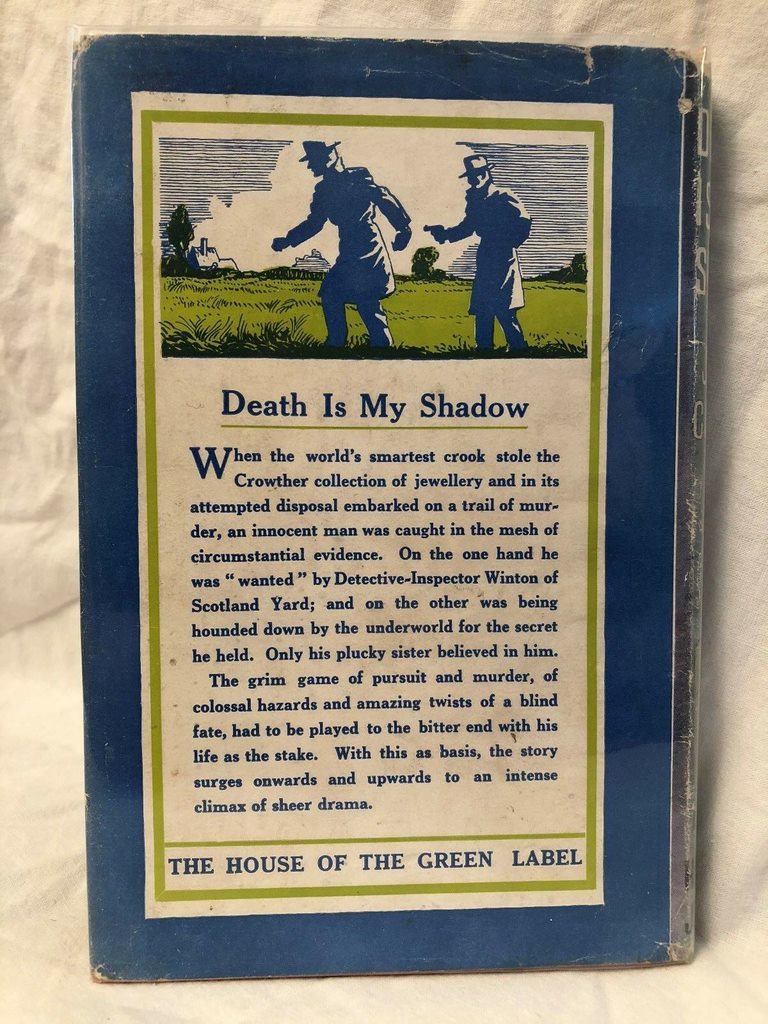 When you do turn it over (following the instructions), note the prominent line at the bottom “The house of the green label”. There is no green label anywhere that I can find. Another mystery. A quick Internet search turns up this line in a book trade journal “Every Herbert Jenkins book bears on the back a green label as a guarantee.” What does it guarantee? And why is that guarantee conspicuously missing from the Corbett novels? These are deep and murky waters. One fears what lies beneath the surface. Let us pass on to examine individual books.

A keen observer would look at the cover and wonder “Why is the statue of Liberty stabbing herself with a sword?”. A keener observer would note the belt loop which disappears halfway down her dress and defies gravity. The keenest mind would read the publisher’s note inside – “This book is produced in complete conformity with the authorised economy standards”, a truthful if damning statement of Corbett’s skills – and run for the hills.

Look at the back cover. The art director, who may have actually been forced to read the novel, has lost his mind. The woman’s dress is green. So are the stones in the wall. And the sky. Or is that the grass? Who knows? And what are those white streaks in the background? Even the illustrations are baffling in a Corbett mystery. 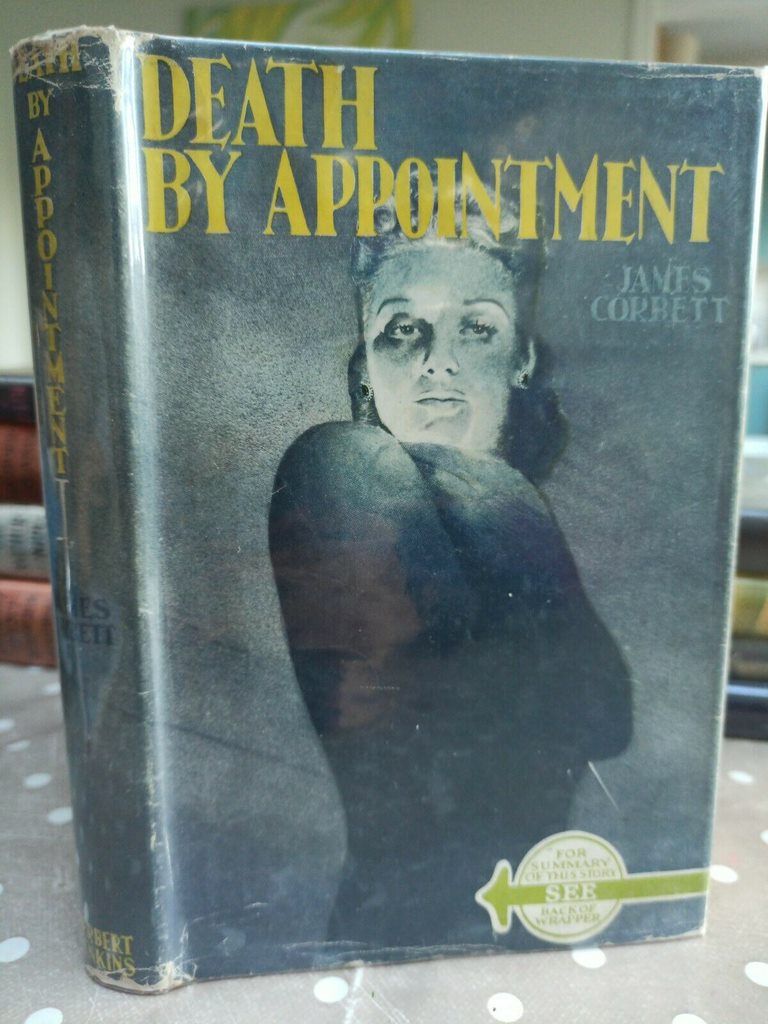 Observe the strikingly mysterious woman on the cover. You may wonder whether the artist had seen any woman from the neck down before coming up with this masterpiece. The spine of the book gives the title of the book as Death by appointmentt (at least, that’s what it looks like). The back cover has the title “Death – by appointment”. One book, three titles on the same cover. Perhaps Corbett was hoping that the book would be listed thrice in the Herbert Jenkins catalog or that it would make it easier to bury bad reviews. A marketing masterclass. 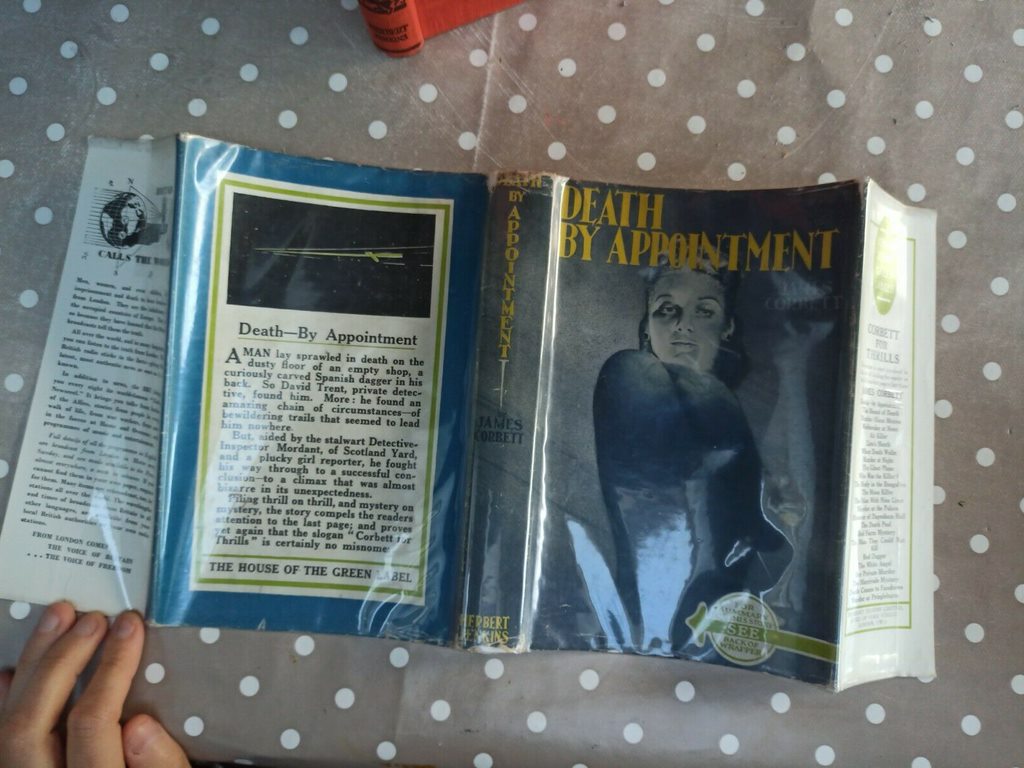 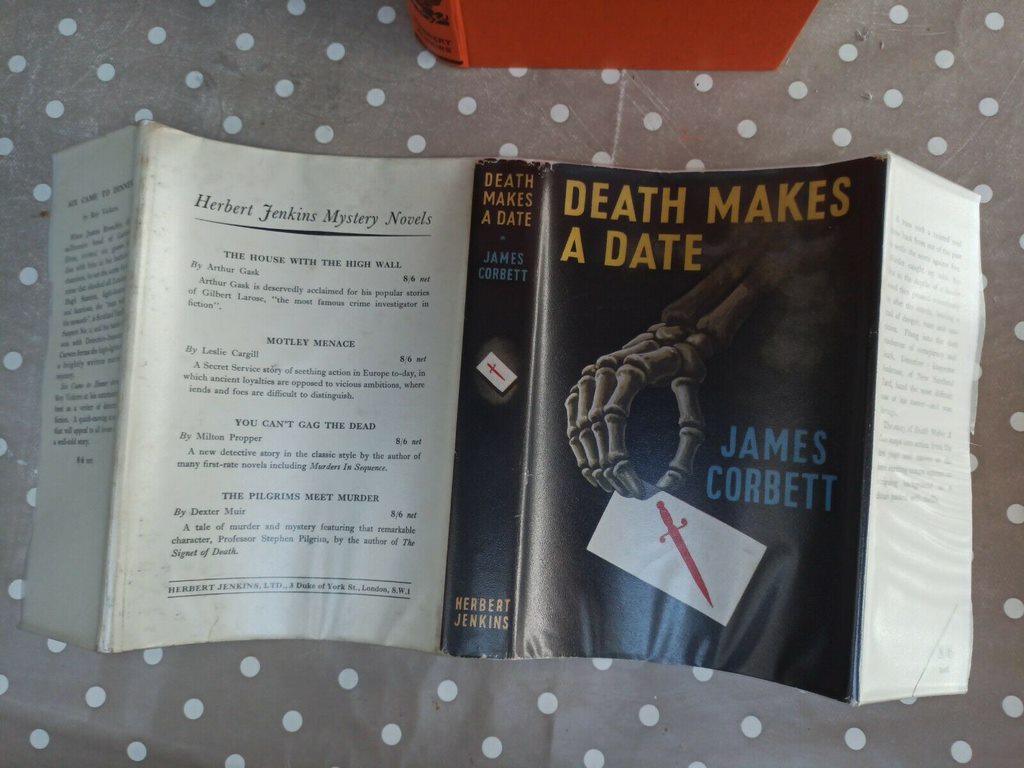 By this book, the publisher had stopped putting blurbs on the back cover on the grounds that customers might actually read them. Instead we have a blurbs for other offerings from the publisher, showcasing their devotion to truth and eye for detail. Arthur Gask’s Gilbert Larose is “the most famous crime investigator in fiction”. Take that, Doyle and Holmes. Motley Menace by Leslie Cargill is “A Secret Service story of seething action in Europe to-day, in which ancient loyalties are opposed to vicious ambitions, where iends and foes are difficult to distinguish.” Curse those foul fiends, they’ve become partly invisible now. Or was that supposed to be friends?

I clicked through all the images in every listing, and found many of the books had blurbs, presumably written by the master himself. Who else could summarize his plots?

Felix Gregory was commissioned to carry certain dispatches of vital importance to an address in Paris. As a foreign power with many agents had determined to lay its hands on the papers, it was extremely unlikely that his journey would be uneventful.

However, Gregory set off, accompanied by a beautiful girl, Vera Auckland, whose one idea was to find the murderer of her father, who had been killed in the Grafton Cafe, for she suspected that he had been employed in some way other than his parliamentary career.

The journey to Paris, the tragedy that occurred en route, and the strange happenings in Berlin which beset the emissaries combine to make a yarn fraught with excitement and thrills.

An alert reader would have noticed that, asked to take vital papers to Paris, the hero ends up in Berlin. Does he have no sense of direction or is this a calculated misdirection from Corbett? The language is the clincher in the identification of Corbett as the blurb writer “she suspected that he had been employed in some way other than his parliamentary career.”

The Hound of Death

In a grim game of wits, played for big stakes, Detective-inspector Brigg, C.I.D., fought desperately to arrive at a solution, aided on the one hand by a dare-devil reporter and baffled and frustrated on the other by all the cunning and weird mystery of the East.

How can a hand be baffled and frustrated? Read Corbett for the mysterious explanation, not necessarily the explanation of the mystery.

Death is my shadow

When the world’s smartest crook stole the Crowther collection of jewellery and in its attempted disposal embarked on a trail of murder, an innocent man was caught in the mesh of circumstantial evidence. On the one hand he was “wanted” by Detective-Inspector Winton of Scotland Yard; and on the other was being hounded down by the underworld for the secret he held. Only his plucky sister believed in him.

The grim game of pursuit and murder, of colossal hazards and amazing twists of a blind fate, had to be played to the bitter end with his life as the stake. With this as basis, the story surges onwards and upwards to an intense climax of sheer drama.

“We know the lion by his claw” is what the mathematician Bernoulli had to say about Isaac Newton. Likewise, we know the literary lion Corbett by his flaws. An innocent man is being hounded for a secret. How did he get it if he was totally innocent? As for “the story surges onward and upward to an intense climax of sheer drama”, I challenge any living writer to equal that lapidary prose.

At a time when the tide of events seemed to be turned against the cause of freedom, Department 4B, British Military Intelligence, assigned one of its star agents to a job that teemed with risks and called for courage and resourcefulness of the highest order.

Against that agent, Ralph Peterson, were ranged hidden, sinister forces, commanded in the heart of England itself by one from whom his dreadful adversaries, placing every resource at his command, expected victory in the tremendous battle of wits that ensued.

But aided by a girl, comrade-in-arms and lover, the star of 4B crashes home to a brilliant success. From start to finish this story is possessed of an immense vitality and is packed with thrills, proving yet again that James Corbett stands almost without equal in this class of fiction.

“James Corbett stands almost without equal in this class of fiction” is boldly said, tongue in cheek while “the star of 4B crashes home to a brilliant success” was probably the first and last time a crashing star landing on your home was considered a good ending.

The blurb on the cover says “The secret service adventures of a private detective” showing yet again Corbett’s gift for melding genres, in this case the detective and the thriller, to produce his own unique brand of prose. Brand is the mot juste, as the words are permanently seared on the reader’s memory, much to their chagrin.

I am coming around to the theory that the multi-talented Corbett did it all: wrote the books, painted the covers and wrote the blurbs. Herbert Jenkins had as little to do with them as possible. Which publisher would?

These Corbett novels would make great stocking stuffers for reviewers or relatives who offend you. Send them as gifts and watch the reader descend into gibbering idiocy.