Skip to content
[Recently read Chess’ first story in Western Story magazine, The Sign of the Skull, an unusual western story of revenge set in a pirates’ inn in the Chihuahuan Desert. After reading the story, I wanted to learn more about the author and what I found was enough to warrant this article.]
Elliot William Chess was born in El Paso, Texas, on 25 October 1898 to Louis Frederick and May Chess. Both of his parents were from Texas, his father was described in the 1900 census as an ice dealer, and his mother as a housewife. They had married the same year, on 1st January 1898. The marriage doesn’t seem to have lasted, and Elliott grew up with his mother and her family.
Elliot went to school in El Paso, and attended the El Paso High School, an imposing building.
He was probably the first member of his family to go to college. The college was the Texas State School of Mines and Metallurgy, established in 1913. Elliot enrolled there in 1917, and went to college for about a year.
The United States entered World War 1 in 1917. It was unprepared for the war, and that lack of preparation was most evident in the air force, for which even the foundation was missing. To speed up the creation of an American air force, Canada and Britain ran training schools in the United States. Elliot attended the British training school at Fort Worth and went overseas to fight with the Royal Flying Corps. He was granted a temporary commission as a second lieutenant during his service. The war ended soon after Elliott’s training, and he must have been itching to fight.
At the end of the first World War, Poland became an independent country again after more than a century of being partitioned and ruled by three neighbors – Germany, Austria and Russia. Neither the Germans nor the Russians liked the idea of a free Poland. In 1919, the Russians tried to invade Poland but were met with fierce resistance from the Polish military, including the Polish Air Force.
In 1918, when the occupying powers had left Poland, the 3rd Air Escadrille Squadron was formed, out of the aircraft left by the Austro-Hungarian forces. In 1919, sixteen American volunteers joined four Poles and a Canadian pilot to form the 7th Squadron of the Polish Air Force, known to us as the Kosciuszko Squadron. Named after Tadeusz Kosciuszko, who had fought in the American Revolution, the American pilots felt that they were repaying his service in the American cause by aiding Poland.
The squadron’s captain was Merian C. Cooper. Cooper was a descendant of John Cooper, who had fought alongside another Pole, Kazimierz Pulaski, in the American war of independence. Cooper would later go on to produce the first movie adaptation of King Kong in 1933. But that was in the future.
From 1919 to 1921, the Kosciuszko Squadron’s pilots fought and trained other pilots. Chess was one of the original volunteers, and he designed the squadron’s emblem. During his time with the squadron, he was shot down, crashed, captured by Polish troops and  held prisoner until the arrival of an officer who could speak both Polish and English. The war ended in 1920, with the Russians forced to sue for peace. The American volunteers stayed in Poland, patrolling the front lines till an armistice was signed in March 1921. Elliot came back to the United States in June 1921 and worked for a time in El Paso as a newspaper man with the El Paso Times.
By the late 1920s, Elliot was in New York, starting his fiction career. He may have also worked as an editor for Fiction House, one of the foremost publishers of aviation pulps. With his background, it seems inevitable that he produced stories for the air pulps. In 1930, he married Jean Townley Wallace, who graduated from the University of Columbia nursing school in 1926.
During his writing career that spanned from 1929 to 1940, he had 74 stories published in the magazines, all except 10 in the pulps. In the pulps, he divided his output nearly equally between the western and the air war genre. He produced short stories and novellas, again nearly equally dividing his time between them, but no serials. He was a prominent author, enough to be featured on covers many times. Most of his work was done between 1930 and 1934, when he wrote about three-fourths of his stories.
Sometime in the 1930s, he was divorced from Jean Wallace, who had remarried by 1938.His last story for the pulps appeared in 1937, his career writing fiction for magazines ended in 1940. 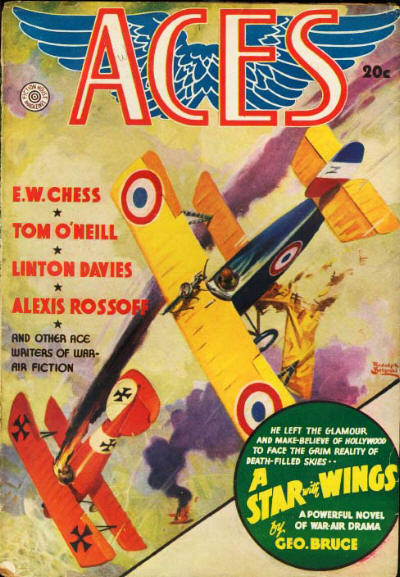 In 1941, his only novel, Walk away from ‘em, was published by Coward-McCann. It’s not clear whether the titular ’em refers to the crash or the women 🙂 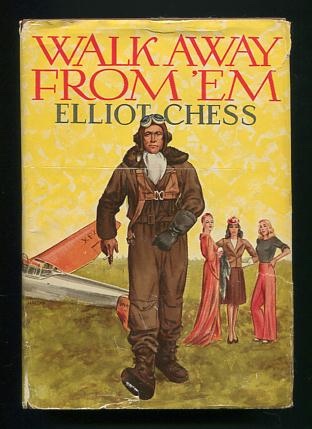 In World War 2, Chess seems to have served in the military again as a pilot for the “A” Troop Carrier Group of the Ninth Air Force, transporting soldiers. After the war, he moved back to El Paso, and 1946 found him in Ajijic, Mexico, where many foreign writers and artists had visited and settled in the villages around Lake Chapala, attracted by the low cost of living and the beautiful scenery.
In 1946, Elaine Gottlieb, a writer herself, came to Ajijic from New York and stayed at the Casa Heuer, where Elliot was staying. They fell in love, and lived together as a couple from September to November of 1946, though they did not register their marriage. At this point, Elaine discovered that she was pregnant, and Elliot told her that he would have to go to El Paso and sell some land to get money to get married and settle down. After waiting for him to come back, she went back to New York and they never met again.
By this time, the pulps were disappearing, taking the market for his stories with them. He never published anything again and on 27 December, 1962, he died of a heart attack at his home in El Paso, Texas. His mother had died earlier the same year.