Skip to content
Continuing from last week’s The first blind detective in modern fiction
Clinton Holland Stagg, the creator of the first fictional blind detective, was born on 22 November 1888 in Newark, Essex, New Jersey to William E. Stagg and Annie Stagg (neé Holland). There is no record of his father’s profession at the time of his birth. In the 1900 census, Clinton is listed as “At School”, and his father’s occupation is “Machinist”. The family had moved to Bloomfield, less than 10 miles distant from Newark. A younger brother, Horace was 9 years old and attending school.

By 1905, his father had progressed from manual labor to a clerkship, and Clinton was a clerk as well. A sister, Gladys, was born in 1904. The family was in East Orange, NJ. East Orange is on the way from Newark to Bloomfield. All three places are near Thomas Edison’s office and laboratories in New Jersey.

1910 was a good time for the Stagg family; William Stagg had become an accountant in a creamery company, Clinton was a newspaper reporter and Horace was employed as an electrician. William’s career sounds one of the success stories of the correspondence schools that advertised so heavily in the pulps – from humble machinist to clerk to accountant and presumably on track for a position in management.

Returning to Clinton, we know very little about his doings at this time. A publicity press release for Lasky Studios claims that he had been a newspaper man turned political lobbyist. It further claimed that he had taken positions for and against Woodrow Wilson, who was the governor of New Jersey from 1911 to 1913 before he became the president of the United States.

What we know for sure is that his first story was published in People’s Ideal Fiction Magazine in the September 1911 issue.     People’s was a companion to Street and Smith’s The Popular Magazine, and emphasized detective fiction rather than straight adventure. Clinton’s first story featured a series character – Hartley J. Rudge, Master of Publicity, who appeared in 13 stories till the January 1913 issue. As I do not have any of those issues of People’s, and the stories weren’t reprinted, that’s all I can say about that.

At the time, New Jersey was emerging as the center of the film industry in the US. This was because Thomas Alva Edison had patents on movie technology and owned a studio that made many early films. Proximity to New York meant that Broadway stars could easily come there, and the varied landscapes allowed filmmakers to shoot films against natural backdrops. In 1907, Edison’s film company set up shop in Fort Lee, NJ. It is possible that Stagg grasped this opportunity to enter the movie business – he was in the right place at the right time. But we don’t have any evidence of it.

Stagg must have been doing all right financially because he took a trip to Bermuda in 1912. And he married Agnes Wedgewood in Jersey City, NJ in 1913. The marriage was very short lived; I can find no reference to his wife anywhere.

In 1913, Stagg published the first story of Thornley Colton, blind detective, in People’s Ideal Fiction Magazine. He published eleven stories that year, of which eight were Thornley Colton stories. The series was a success. He claimed that an interview with Helen Keller inspired him to create Thornley Colton.

Lesser known, but no less important in the genesis of Thornley Colton, is Dr. Jacob Bolotin, a blind physician(!), who resided and practiced medicine in Chicago. The editor of People’s must have received some criticism from people who couldn’t believe that a blind person could be a detective, and his response was the following introduction to one of the stories (I’m not sure which one; I found it as an introduction to one of the early editions of Silver Sandals, a novel featuring Thornley Colton).

To the great majority of people blindness is a synonym for helplessness. This isn’t at all remarkable. The mental conceptions of most humans are based on what their eyes have seen. The hobbling blind beggar, with his cane and dog, comes instantly to the mind when one’s thoughts turn to those who are sightless. But have you ever realized that the straight-shouldered man with the confident stride and the snappy step of health, who makes his way through the Broadway crowd, may be as blind as the beggar who shuffles along the edge of the pavement? You wouldn’t believe it, probably, if someone told you; simply because his actions are the actions of a man in possession of all his faculties. But there are men to whom, for all practical purposes, eyes would be almost as superfluous as the vermiform appendix. Does that sound ridiculous?

Of course, you have heard, or read, or perhaps have seen, the wonderful Helen Keller. Helpless? A thousand times no! Helpful is the word. But did it ever occur to you that the very lack of sight might be itself a big factor in the development of her wonderful insight, her remarkable grasp of big subjects, the human appeal in her written words, her beautiful viewpoint, and the all-enduring optimism that has made her one of the best-loved women in the world? It is Thornley Colton’s astonishing physical abilities, however, in which you don’t quite believe: the delicate touch, the step counting, the independence of action. Have you ever heard of America’s wonderful blind surgeon and diagnostician, Doctor Jacob W. Bolotin, of Chicago? Born blind, he has a mentality and has acquired physical abilities that, to the average person, seem absolutely superhuman. Below, in tabular form (sic) are some of the things this sightless doctor does, and remember this is not fiction, but fact.

•                     To earn money enough to pay his college expenses he traveled alone all over the United States as a typewriter salesman for four years. He made such a success of the work that, when he resigned to enter medical school, he was one of the highest paid sellers of writing machines in the West.

•                     His sense of touch is so delicate that he can read the raised Braille letters for the blind through the thickness of sixteen handkerchiefs.

Would you believe some of those things if you read them in a fiction story? Yet every fact can be verified by the physician himself, or any of his hundreds of friends. And Doctor Bolotin says there is no reason why a blind person should not be as successful as one who can see.

And lots more in similar vein. To read more about the extraordinary Dr. Bolotin, you’ll want to read the book The Blind Doctor: The Jacob Bolotin Story. It was written by Rosalind Perlman, who married the nephew of Dr. Bolotin.

Coming back to Stagg, he was clearly doing well as an author and perhaps film scenarist. A racing novel, High Speed, that was expanded from a novelette in People’s, was published in 1915. That and 21 other entries in the magazines, made it his most productive year. Which is probably why Lasky Studios hired him as a scenario writer and took him to Hollywood. 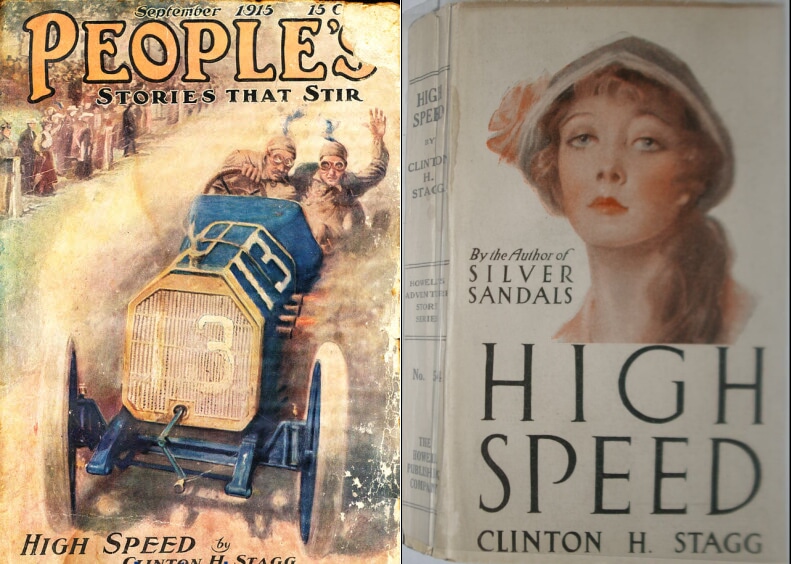 By May 1916, Clinton Stagg was doing well in Hollywood. He was credited with 9 scenarios for short films produced by Lasky and was given story credit for one other short. With this workload, his story output for the magazines had dropped to 9, understandably. A Thornley Colton novel, Silver Sandals, was published in 1916. The story had appeared as a serial in People’sin 1915. 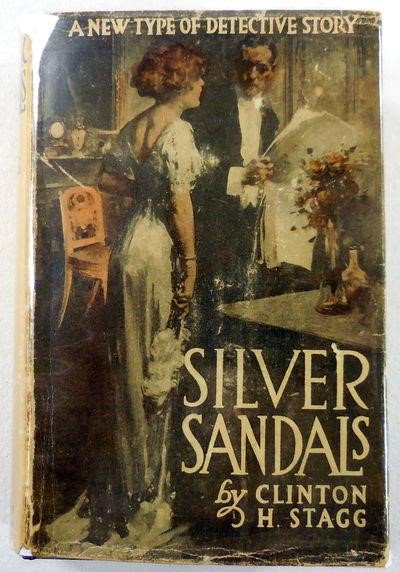 It is when things are all going well that tragedy seems to strike. On May 3, 1916, he and two other authors were driving along La Brea Boulevard after supper at the Hollywood Hotel. It was a clear night, and the apparently deserted road tempted the driver into speeding. Then the left front wheel came off the car. It careened to the left, ricocheted from a telegraph pole into a ploughed field and turned over several times before coming to rest. Stagg’s skull was crushed and he died fifteen minutes after being pulled from the wreckage. When Stagg’s mother received the news of his death, she was recovering from an operation. She suffered a relapse and died on May 6. Mother and son were buried together.

Mike Grost reviews the Thornley Colton stories here; he’s happy with the one he read. A reprint of all the short stories and the novel is available from Coachwhip Publications with the title: The Problemist: The Complete Adventures of Thornley Colton, Blind Detective.

Thornley Colton is very much in the Sherlockian intuitionist detective mold. He has a Watson (Sidney Thames, who gets his last name from the fact that he was found on the banks of the river), a parade of Lestrades from police headquarters and even a singular Baker Street irregular (The Fee/The Shrimp, an orphaned child who was adopted by Colton at the conclusion of a case where the child’s father murdered his mother). His cases usually happen in small spaces with few people, which is convenient as he can sense or memorize the positions of everything and everyone.

In the Grand Detective manner, he extracts clues that less keen eyes have missed, dispenses cliches and catchphrases hither and thither, leaving Thames baffled. That is Thames’ function, which he performs well. As a reader, we share a few of Colton’s secrets to overcoming his blindness, one of which is Thames’ skill of measuring distances in strides so that he can tell Colton the layout of any place in advance. Colton can use this information to make it seem as if he perceives space despite his blindness. By sharing these secrets with us, Stagg makes the aloof detective more human (he has pride in appearing self-reliant, even though he really isn’t).

All eight Thornley Colton stories were published in People’s magazine, Street and Smith’s companion to The Popular Magazine , from February 1913 to October 1913. One story per issue except for August 1913. People’s is one of those ultra-rare pulps you don’t hear much about, because most people haven’t seen a copy, let alone read an issue.

Which is why it is fortunate that all the Colton stories and the novel were recently reprinted by Coachwhip Publications. (The other in-print edition is from Forgotten Books, who are famous for reprinting public domain books. The forgotten part in the publisher’s name perhaps refers to the proofreading they should have done. Or it may refer to the fact that their reprints should be forgotten. I forget.) Coachwhip is a small print-on-demand publisher that publishes an eclectic mix of titles on crypto-zoology, mysteries, history and business. Their mystery lineup is worth checking out.

The braille signs on the cover spell out m u r d e r. I wonder if the print is raised.

Next week: An annotated bibliography of the Thornley Colton stories