Isabel Ostrander was a prolific writer in the early twentieth century, contributing more than thirty serials using three pseudonyms, and perhaps more under other names, to the Munsey and Street and Smith pulps in little over a decade before her untimely death. Many of these serials were later reprinted as novels, some with changed titles.

Her inclusion in this series of articles is due to her creation of Damon Gaunt, the second blind detective to feature in American fiction. The first was Thornley Colton, created by Clinton H. Stagg. Damon Gaunt is however, closer to the British school of detective fiction epitomized by Agatha Christie’s Hercule Poirot. How? We’ll see later.

Isabel Ostrander was born in New York state on September 14, 1883 to Thomas Egenton and Harriet Elizabeth Ostrander (neé Bradbrook). They had married thirteen years earlier and Isabel was their second child. The first had died a month after her birth in August 1871. Isabel was the name of his mother, whose name was handed around generously in the family for at least three generations. The Ostranders were a large family of Dutch descent who had been in New York since the early 1700s. Thomas was in real estate and insurance, and the family was well off.

Her family travelled the world, and as a child she lived in different cities in Australia, South Africa and England and presumably continued her education there. After their return to New York, she entered the Veltin school which was a college preparatory school that prepared the daughters of the social elite for admission into colleges like Bryn Mawr, Wellesley, Vassar and Radcliffe.

While there, she was a contributor to the Veltin school magazine, The Owl.

She then went to a convent in France, returning to New York after a year. She graduated from the Misses Graham School, an exclusive finishing school in preparation for her entry into New York high society circles. It was the school where Emily Post, the etiquette advisor and socialite, had studied.

She never went to college, though. She was a socialite, and as such was reported on in the society section o different newspapers. Later, she took a course in drama at the American Academy of Dramatic Arts. After this she visited India, Egypt and various places in Europe, she made her home alternately in London and Paris. Her father died in 1903.

In June 1907, she ran away from home and married Arthur J. Lamb, a Broadway song-writer. They were engaged at the time but didn’t want to wait to get married. The marriage was not a success. By 1908 she was testifying against her husband in a court case brought by Harry Von Tilzer, another song-writer who had commissioned Lamb to produce a song. Lamb produced nothing but excuses, and Isabel’s affidavit laid bare his duplicity. They divorced in 1910, but the marriage had ended earlier.

Neither was her second serial so honored. The Heritage of Cain was published in The Cavalier, March 30 1912 at a time when there were no pictorial covers on that magazine. But the omission of her name from the cover must have been deliberate.

Her mother died in April 1912, having not seen her daughter’s success.
This omission was soon corrected. The Affair across the street, in The Cavalier dated September 13 1913, had her name on the cover.

It was her fourth serial, Eyes that see not, that saw the blind detective Damon Gaunt’s first and perhaps last appearance. It was reprinted in newspapers with a new title of At One-Thirty and republished in hardcover under that name.

From this point on her career was going from success to success. Her serials were reprinted in newspapers across the country. Strangely though, her output dipped to just three stories, none of them serials, in 1915. And six in 1916, again no serials. Why? I don’t know. Perhaps it was because the first movie based on her stories was made that year. Lavinia comes home was a two-reel feature. I couldn’t identify the story, which is a melodrama about a circus girl who gives up bareback riding and pretends to be the long-lost daughter of an old couple for the publicity. It might have been something that appeared in the newspapers, instead of the magazines. Or it might have been an original movie script.
1917 saw an explosive return to normalcy. With three serials in the Munsey pulps and eight short stories in the pulps and Sunday supplements, she must have been doing well. From 1918 onwards she was producing serial after serial for Street and Smith and Munsey. She used 3 pseudonyms – Robert Orr Chipperfield for detective stories, David Fox for the Shadowers series of stories concerning the operations of a group of rich men who act in the cause of justice and Douglas Grant for her western stories. Her fan mail to the publishers often praised one of her pseudonyms, while deprecating the others.Argosy even published a fake biographical article – David Fox—New Literary Genius. By this time, whenever a story of hers appeared in the Munsey pulps, she was featured on the cover.
1919 saw the publication of one of her best stories. Ashes to Ashes started in All-Story Weekly’s September 27 issue. It’s one of the earliest inverted detective stories. The antagonist (why I use that word will become clearer by the end of this paragraph) is Norman Storm, the son of a rich man who is squandering the last of his inheritance. As he comes out of his lawyer’s office, he sees his wife in town. He is surprised as she never leaves home. On going back, he asks her where she was that afternoon. She says that she had never left home. He becomes convinced that she is having an affair. Infuriated by the idea of her having an independent existence, he kills her. He is not suspected of this murder, and feels like he has outsmarted the police and his friends. 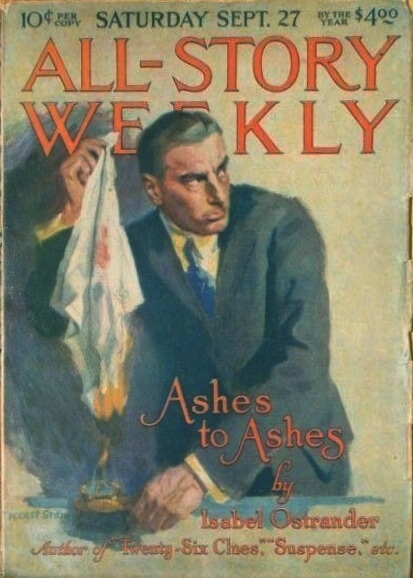 The lack of money to maintain his lifestyle remains a problem. A friend meets him after a separation of two decades, and reveals that he is carrying the company payroll. Storm kills him for the money. Because he is carrying money, the police start investigating seriously. Storm starts sweating…
I don’t think it’s coincidental that both her best novels were about abusive husbands who held their wives in contempt, and tried to make every situation profitable for themselves, no matter the cost to others. It is surprising to me that neither of them was remade into a movie. Perhaps the audiences then weren’t ready to see that kind of movie back then.
Other movies were made based on her stories. All featured strong women protagonists, another rarity for the time.
The Red Glove (1919) was made from The Fifth Ace, published in Argosy under the Douglas Grant pseudonym, and starred Marie Walcamp. 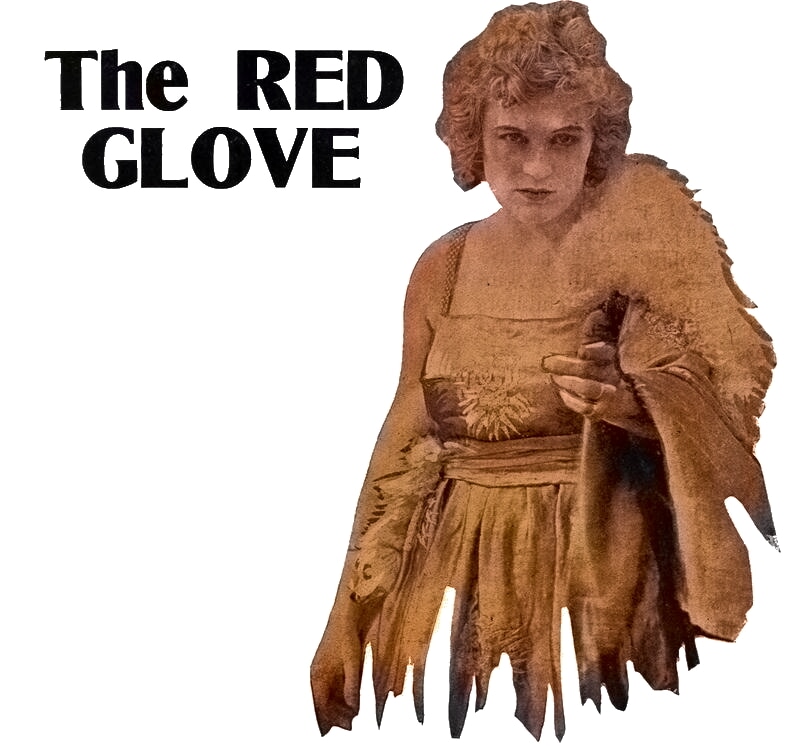 Mollie King starred in Suspense(1919), made from the story of the same name published in All-Story Weekly. 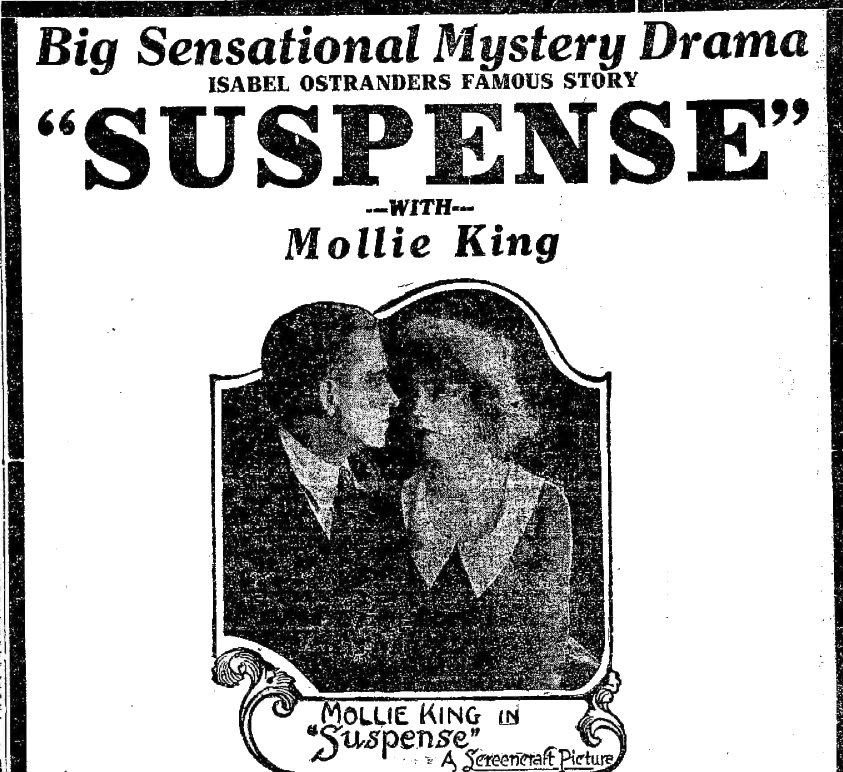 I have not been able to identify the source for The Island of Intrigue(1919). It starred May Allison.

The story of a woman building an Alaskan railway, The Single Track (1921), was made from the Argosy serial with the same name. 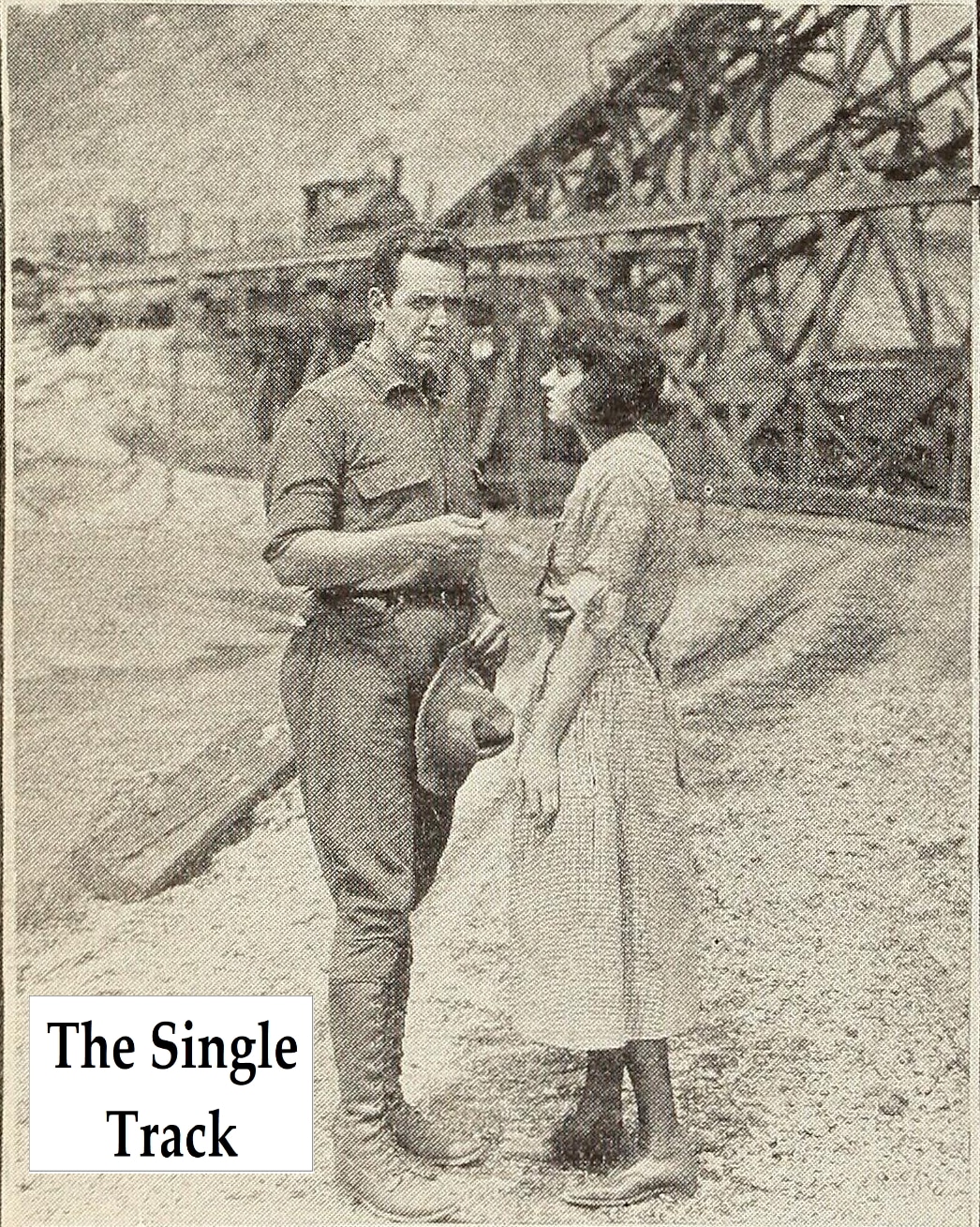 At the height of her success, Isabel Ostrander died on April 26, 1924 of heart failure after an illness of several weeks. At the time of her death, she was living in Long Beach, New York with Mrs. Jerome Kloss, the mother of her secretary. Her will left everything to Mrs. Kloss. Even after her death, stories and serials bearing her name appeared in the pulps. And a few movies based on her stories were produced after her death.
Next in this series: Damon Gaunt