Here we are the end of this series of posts about blind detectives. I’ve already written about Bramah, so this article focuses on Max Carrados. And there is no better way to appreciate Carrados than to sample his stories. I’ve read all three collections of the Carrados stories: Max Carrados, The Eyes of Max Carrados and Max Carrados Mysteries.

From these, I’ve picked my favorites and added a quote so that you can get a flavor of Bramah’s writing. All these stories and a few others are collected in the Dover reprint, The best Max Carrados mystery stories, which includes a great introduction by E.F. Bleiler. 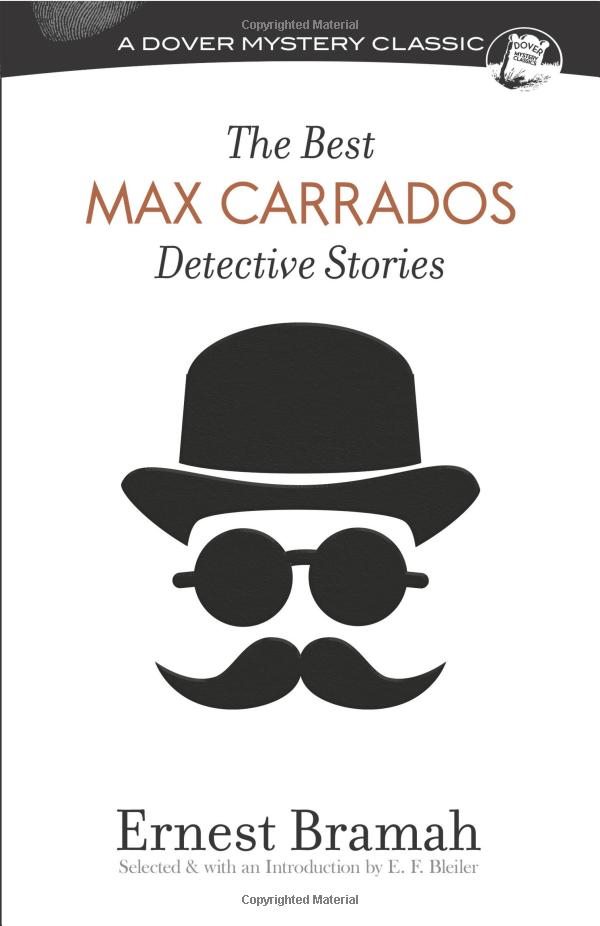 The Tragedy at Brookbend Cottage

One often meets his destiny on the road he takes to avoid it. Master Oogway in Kung-Fu Panda (2008).

A man worried about his sister comes to meet Carrados. He suspects that her husband is trying to murder her for money and freedom from a failed marriage. Carrados unearths and averts a deadly plot. But…

“A sunny, sheltered corner,” he remarked. “An ideal spot for a deck-chair and a book.”

She shrugged her shoulders half contemptuously.

“Sometimes, surely,” he persisted mildly. “It would be my favourite retreat. But then——”

“I was going to say that I had never even been out on it, but that would not be quite true. It has two uses for me, both equally romantic; I occasionally shake a duster from it, and when my husband returns late without his latchkey he wakes me up and I come out here and drop him mine.”

The last exploit of Harry the actor

Carrados encounters his Irene Adler. Carrados visits a reputedly impregnable vault, a place where rich families keep their jewels and businessmen their valuable papers. To access their box, a customer must provide a password and a specimen signature. If either don’t match, the safe is not unlocked. Once the safe is unlocked, the customer must use a key that is given to them at the time of renting the box. And yet things disappear. Bramah is having fun in this story, as will you.

“If you consider that the proper course to adopt is to stand on the doorstep and beckon in the first constable who happens to pass, permit me to say, sir, that I differ from you,” retorted the distracted manager. “You may rely on everything possible being done to clear up the mystery. As I told you, I have already telephoned for a capable private detective and for one of my directors.”

“But that is not enough,” insisted the professor angrily. “Will one mere private detective restore my £6000 Japanese 4-1/2 per cent. bearer bonds? Is the return of my irreplaceable notes on ‘Polyphyletic Bridal Customs among the mid-Pleistocene Cave Men’ to depend on a solitary director? I demand that the police shall be called in—as many as are available. Let Scotland Yard be set in motion. A searching inquiry must be made. I have only been a user of your precious establishment for six months, and this is the result.”

There is bad blood between a man and his half-brother’s family. Their father has left them each half his estate, and a covenant that no one should sell or disturb the land unless both agree. There is coal below the surface of the land, and one needs to mine. Uncle and nephew meet in his library, two shots ring out. The uncle is dead and the nephew is miraculously left alive. Carrados explores the hidden facts and what he finds in their hearts is such darkness as you might find in a deep coal mine. But there is one glimmer of light, which he returns to from time to time later in life.

“Now, Mr Carrados, you were to be my judge.”

“I think,” said the blind man, with a great pity in his voice, “that it will be sufficient for you to come up for Judgment when called upon.”

The Comedy at Fountain Cottage

The idea of eating offal is not something most people take up as adults. Kidneys, except when properly prepared, are pretty low even by offal standards. Now imagine your neighbor throwing a bunch of kidneys into your garden daily. That is the situation in the house of Elsie Bellmark, Carlyle’s niece, into which Carrados walks. Carrados is gallant and charming, and while there is no real crime, the ending is delightful.

It was entirely devoted to unostentatious little houses, something between the villa and the cottage, some detached and some in pairs, but all possessing the endowment of larger, more umbrageous gardens than can generally be secured within the radius. The local house agent described them as “delightfully old-world” or “completely modernized” according to the requirement of the applicant.

The Eyes of Max Carrados

The Disappearance of Marie Severe

The child of a divorced couple disappears and Inspector Beedle seeks help from Carrados. This is a case where Carrados strains credibility by outmatching a police dog’s sense of smell, and yet it is the humanity of the tale that I remember.

“I was afraid. I was afraid of what they’d do. And no one ever guessed until I thought I was safe. Indeed I meant no harm to anyone, but I was afraid that they’d punish me instead.” Carrados had risen and was picking up his things.

“Yes,” he said, half musing to himself, “I knew it must exist: the one explanation that accounts for everything and cannot be assailed. We have reached the bed-rock of truth at last.”

Carrados’ butler asks him for assistance in a personal matter. The butler’s investment, a home that he rents out, may be at risk of being used for illegal purposes. Carrados goes into the place and finds a card playing automaton used for gambling.

The venerable Mr. Spinola received them in the salon set apart for the display of the automaton and for cards in general. It was a room of fair proportions—doubtless the largest in the house—and quite passably furnished, though in a rather odd and incongruous style. But probably any furniture on earth would have seemed incongruous to the strange, idol-like presence which the inventor had thought fit to adapt to the uses of his mechanism. The figure was placed on a low pedestal, sufficiently raised from the carpet on four plain wooden legs for all the space underneath to be clearly visible. The body was a squat, cross-legged conception, typical of an Indian deity, the head singularly life-like through the heavy gilding with which the face was covered, and behind the merely contemplative expression that dominated the golden mask the carver had by chance or intention lined a faint suggestion of cynical contempt.

The Mystery of The Vanished Petition Crown

A valuable coin goes missing at an auction. The last person to see the coin is a lady journalist, who is the natural suspect. Carrados is asked to help, and he is so charmed by her voice that he cracks the mystery and identifies the mad collector behind the theft.

‘Poor Louis!’ thought his friend. Then aloud, ‘And is human nature entirely transformed by the five-mile radius, Miss Frensham?’

‘No,’ she admitted seriously. ‘But at least I know exactly where I am. There is no competition to carry my parcel or to run my errands—I hope I haven’t given the impression that I want it?—but if anything I do does happen to get praised I can believe it honest; if I make a friend I can really feel that it is for myself…. I am no longer, as I heard of one “admirer” dubbing me, “The Girl with the Golden Mug”.’

Both laughed. Then he grew almost pensive.

‘After laughing at that let me say something,’ he ventured at length. ‘When you needn’t fear having to meet a man’s eyes ever he may be privileged to an unusual frankness…. Think as little of looks as you do of lucre, Miss Frensham. I can know nothing of the features you so dispraise: to me you would always be the girl with the golden voice. I am sure that someone else will see you—as you think you are—as little as I do, and to him you will always be the girl with the golden heart.’

‘You kind man!’ she responded. ‘Well…perhaps there is!’